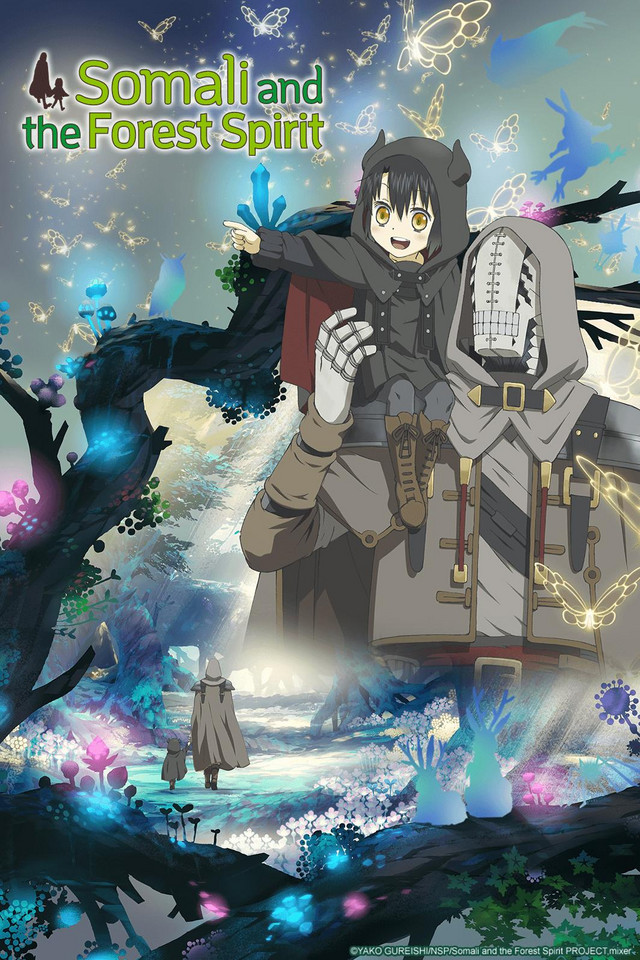 Meetings and Bonds Prayed For

Golem and Somali must seek the head Librarian, Isolde Nebsolv, in order to find the information that was stored inside of the Chronicles of Haraiso.

Praline gives Golem a special book that allows them traverse the massive network of floors in the Library.

So far so good for Golem and Somali as they traverse the Library. That is until some security bugs sound an alarm, alerting the witches of the library.The witches grab their staves and prepare to go after the intruders.

Golem picks up Somali and jumps down to a lower level to lose the security bugs.

You think Praline and Hazel could of at least told Golem and Somali to not get caught or at least make them aware. To be honest, seems like a cheap intentional story plot to cause drama without the real need to do so.

Golem and Somali reach a large room of waterfalls and a large pool at the bottom. With the security bugs on their heels, they have no choice but to jump. Underwater they hear a voice call to them telling them to head towards the light that is guiding their way.

This path leads them to their destination, the room of the head Librarian Isolde Nebsolv.

So, what exactly was the point of the security bugs if Isolde was just going to show Golem and Somali the way and allow them in?

Golem tells Isolde that they wish to hear the contents of the book they seek, The Chronicles of Haraiso. She tells Golem and Somali that it was her that wrote the book in the first place, and that she was the cause of the humans death.

She begins to tell Golem and Somali the tale of the book and story of Haraiso.

It all began with Isolde’s ancestor, Feodora Nebsolv. She was heading back to the witches village in a terrible storm, when she was blow away. She crashed on the shores of Haraiso, and was rescued by a little human girl and a golem.

When Feodora awoke, she was resting in a bed surrounded by other humans.

The humans tell Feodora that she was found by Lord Haraiso, the golem, and Miya, the little girl. They continue to say that Lord Haraiso is considered a god to them since he built the village for the humans and treats them well. Matter quickly turned worrisome when Feodora referred to the humans as a different species, which made the humans rather hostile.

But Haraiso entered and told that the humans that that Feodora is human so there is no need for concern. The humans calmed down, trusting what Haraiso told them.

Feodora asked Haraiso why the humans acted that way. He tells her that humans are frail and cowardly to the point that when something different from themselves appears, they do everything that they can to purge it from their existence.

Haraiso ensure that Feodora will be safe with him watching over her.

Feodora enjoys her stay in the Haraiso village.

She learns the ins and outs of the villages daily routine like harvesting the crops and cleaning the clothes. Feodora seems to enjoy the village life a lot.

In the night, Golem talks with Feodora about safely traveling back to her home, but it seems that Feodora has some reservation about going home. The humans are treating her well and she is enjoying her stay.

In the morning, while Feodora is sitting by a tree next to cliff, Miya comes over to talk with Feodora.

Miya is sad that Feodora is leaving and wishing that Feodora would stay forever. Feodora promises to Miya that though she will be far away, she will always be friends with Miya.

Just then the village bell sounds. Feodora asks what is happening, in which Miya replies that a Grotesque, a monster, has appeared.

Feodora and Miya go into the village to see the trouble and find that the monster has been bound and the villagers carrying pitchforks and axes.

The monster pleas with the people that it has not done anything wrong and it is not their enemy, but the fear in the humans clouds their reasoning. They repeatedly hack and chop at the monster until it is dead, all the while the monster is continuing to plea with the humans to stop.

Feodora, who knows that the monster is not evil and only wishes to live its own life, is saddened and in distraught over the savagery of the humans and their actions.

Frightened by the actions of the humans, Feodora flees from the village before the humans find out what she is and decide to kill her too.

Miya finds Feodora at the tree they were at earlier in the day. Miya tries to bring her back to the village but Feodora refuses and asks Miya if she could be friends with Feodora if she was a monster. Miya tells her that it doesn’t matter because she is human, and that people cannot be friends with monsters.

Just then a string wind blows Miya off the cliff. Roots sticking out of the cliff from the tree catches Miya, but she is hurt and she will fall to the sharp rocks below if she is not rescued soon.

And of course, we can all figure out what is going to happen with this: Feodora reveals that she is a witch, saves Miya, and the villagers turn on Feodora because she is a monster in their eyes.

And yep, Feodora saves a falling Miya from the rocks below, the villagers are cursing at her calling her a monster and that they could kill her. Haraiso steps in and tells her that she is pardoned for saving Miya but must leave for being a monster, though Haraiso is doing this to save Feodora from the wrath of the villagers.

But there is one villager that looks upon a hated monster as she leaves and is sad to see her go, Miya. Miya cries out to Feodora. The villagers try to stop Miya, but Miya continues to cry out to Feodora, calling Feodora her friend.

Feodora is glad and leaves knowing that Miya does not hate her and still sees her as her friend.

And that is the story of The Chronicles of Haraiso.

Isolde tells Golem and Somali that the humans were killed because of the story that she wrote. Feodora wished the story be told in a thousand years to give the humans and monsters time to grow accustomed to one another, but Isolde wrote the book soon after Feodora’s passing.

Though Isolde blames herself, Golem comments that it was a mere coincidence that led to the death of the humans and that her book has no direct correlation the fate of the what happened to the humans.

Isolde calls Somali over to her bed and places her hands on Somalis’.

Isolde is happy to hear that and tells Somali that peace between humans and monsters can still be achieved.

With her final breaths, Isolde tells Golem and Somali to travel to the ends of the world to find the remnants of humankind.

And with that Isolde passes on, granting protection and safety to Golem and Somali on the continuing journey.

Though I did have some problems with the irrelevant dramatic scenes involving the security bugs and the guard withes, overall the episode was enjoyable. Just saying, the bugs and guards, even if they would of been disregarded in the episode all together, the story would have progressed just the same.

The flashback of The Chronicles of Haraiso pretty accurately depicted the fear and hatred in humans when they encounter someone or something different. We as humans tend to fear the unknown and reject differences and changes that interfere with our current lives.

Of course not all are like that, but throughout our own history there have been many events where people of different color or origin were treated with bloodshed or hatred. I know its cliche but the old saying of, don’t judge a book by its cover is still relevant even to this day.