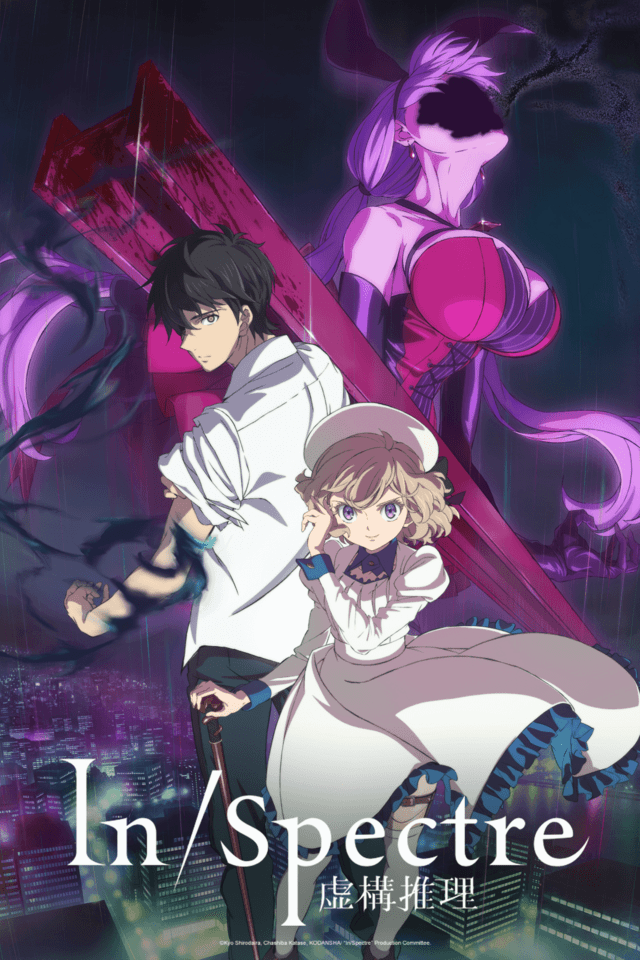 Episode 1: One Eye, One Leg

Within the first minute of the show, we meet the two main characters, Kotoko Iwanaga (right) and Kuro Sakuragawa (left).

Though this is not there first meeting, it is the meeting that started off their continuous journey together.

They actually met two years prior when Kuro was visiting his cousin, who is hospitalized for some unknown reason, and she saved him from falling. Kuro does not remember her all that well, but Kotoko, who is also a patient in the hospital, never forgot him and believed that she was in love with him.

Kotoko was so in love with him that not only did she keep an eye on him every time he came to visit his cousin, she gathered information about Kuro and his girlfriend and the status of their relationship as it progressed.

In the present time, Kuro and his now ex-girlfriend, Saki, are broken up, which Kotoko makes sure the Kuro knows that she knows. Huge red flags here, but okay. Kotoko does not waste anytime and asks Kuro out, but he declines and tells her that he is not in a good place to be in a relationship.

She doesn’t let up and asks him why they broke up. Kuro tells her that when he and Saki were walking by the river shore, they saw a yokai, a kappa from what he thinks. Kuro tells Kotoko that Saki was so afraid by the yokai that she broke up with him and moved away. Though that is not the truth.

The real truth, that Kotoko reveals to him, is that the yokai was so afraid of Kuro that it ran off. Saki realized that Kuro is not normal and couldn’t take being with him. But what about him is not normal, and why would a yokai be so frightened by Kuro? And how is it that Kotoko knows what really happened when she wasn’t even present?

Well she reveals to Kuro that when she was in fifth grade she was kidnapped by yokai and was made into their Goddess of Wisdom.

This goddess would protect the yokai from human and other yokai threats and be the bridge between the human world and the yokai world. She would act as the mediator between the yokai’s involved and solve their issues.

When she was returned to a park bench, she was missing her right eye and her left leg. Kotoko even tells Kuro that he wants to find out if she is telling the truth or not, he can look it up at the library and read the article from six years ago mentioning a girl found on a park bench missing her eye and leg.

Kuro’s interests are peaked and he looks it up at the library, Kotoko to outside waiting for him to come out. When Kotoko sees Kuro leaving the library, she asks him if he believes her now, to which he says that he believes the that she was found with the missing body parts but not the story about the yokai.

Well, that soon changes when a yokai, a bake-danuki, shows up and tells Kotoko that the barrier around the library has been broken.

Kotoko asks Kuro for his help and she eventually guilt tricks him into it by asking him how would he feel if he read the newspaper the next day about a high school girl being killed at the library. So, Kuro tags along to sate his guilt.

As they investigate what is causing the barrier breakdown, they here a loud rampaging sound coming from the top of the stairwell. Just then, a giant bull-like yokai creeps down the staircase making its way towards Kotoko and Kuro.

Kotoko tries to talk to it, but it seems to not be in the talking mood and attacks her. Kuro manages to get Kotoko out of the way, but Kotoko grabs a fire extinguisher off the wall and distracts the yokai with it. It doesn’t distract it long as it comes closer ready to attack again.

Kuro grabs Kotoko, pulls her in close, and stretches out his left arm towards the yokai. The yokai lunges at Kuro and bites off his arm.

Why would he do this and for what reason would he just let the yokai bite off his own arm?

Well, a few seconds later Kuro’s arm regenerates, growing back to normal. But something is happening to the yokai. It seems like Kuro’s arm is like poison to the yokai and it just begins to melt away like acid is being poured on it.

Kuro explains to Kotoko that when he was eleven years old, he was forced to eat two different yokai’s flesh.

I started to rad the manga before the anime was announced, but haven’t made too far in the story. But what I have read has kept me interested.

The world of yokai has always been a common insertion in anime as it is part of Japan’s culture but rarely does it involve a mystery detective theme. The animation is very dull and bland, but for this show it does kinda play well with it as it is not a comedy show but more of a noir-esque dark fantasy anime.

The story played out well and kept a more linear guideline and before I knew, it was over. It revealed a good amount of information to the viewer while still leaving some unanswered questions to move it forward.

Definitely pleased with this first episode and excited to see more.