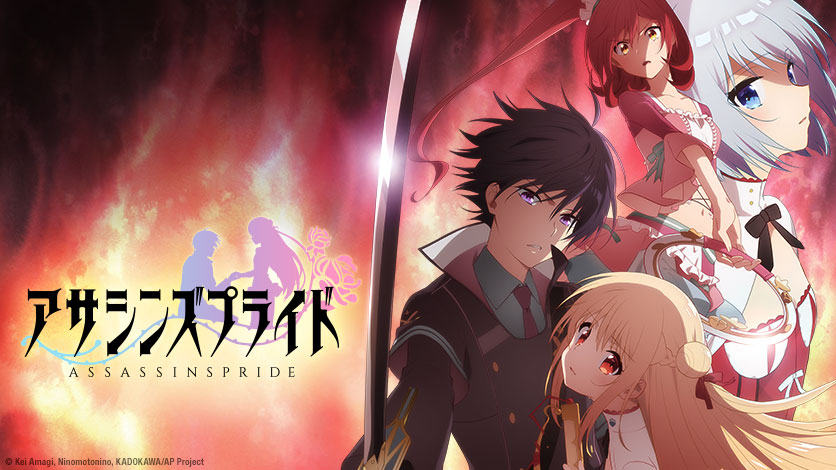 The selection tournament has begun. Though the tournament has fixed by Ms Othello, Ellie’s house maid, Melida and Ellie took it serious. Melida needed to prove that she is strong and not weak in the eyes of her family, and Ellie wanted to get out of the spotlight and be by Melida’s side. But there was a more sinister plot going on right under everyone’s nose. The assassin from last episode, once again, tries to take out Melida. Unsuccessful in her attempt, thwarted by Kufa at the last minute,Melida and Ellie were safe and were able to open up to one another and tell each other how they wanted each other in their lives.

There was about three different plots going on in this episode: the relationship turmoil with Melida and Ellie, the assassin trying to take out Melida, and a mysterious girl from the other competing school. The first two plots essentially wrapped up, but the mysterious girl, who is part of a high ranking family, took a mana analyzer that houses the analyses of all the members of the St. Friedeswiede Girls Academy. So, it seems as though something is going to come from this plot line, but we don’t know just what.

The relationship between Melida and Ellie does have me intrigued because it deals with two young girls who are bound by their family rules, but they both struggle with how their family is treating one another and wish to be together despite their family rules. I also like how Kufa kinda plays a back roll in this episode and centers more on the character development of Melida and Ellie. Kufa has an important job at hand with the assassin, but that does not overpower the rest of the plots. Though the episode wrapped up a couple of the plot stories, the added one was a nice seamless flow into the future episodes to come.

The battle rages on between Futaba and Inukai, the malevolent god masquerading as the student council vice president.While Futaba and Inukai are battling, Takuma is given the chance to escape, but Inukai’s parasites activate within Takuma’s stomach and splits him in two. Takuma not wanting to fail the other girls, activates his own ability as the Einherjar and heals himself. As he makes his way to Natsuki, he fights with determination and focus in his eyes. When he reaches Natsuki, they must level Natsuki up for her to fight the akuma that the other Valkyries are fighting. And that means that they must get completely naked and kiss for five minutes. Ok, sure. Oh what the hell, sure, for fan service sake. So once Natsuki is ready, she enters the fight and takes out the akuma.

The remaining of the episode was the completion of the festival that was going on when the akuma attacked. The only real development aspect in this part was that Takuma and Natsuki had a chance to reconcile and clear up the misunderstandings that was said before the battle, where Takuma told that he didn’t want to dance with Natuski but only because he didn’t want to cause her and himself any trouble with the other guys for dancing with a popular girl like her.

All in all, the episode revealed Takuma’s warrior spirit and broke him out of his cowardly shell. The relationship development between Takuma and Natsuki furthered explored the fact that both of them care for one another deeply but have trouble expressing it. The fan-service was a little unnecessary with the whole getting naked to wash each other because they were dirty and then kiss, but whatever. If you are going to do fan-service at least make it tasteful and connect to the story or showcase it in fights.

With final exams coming up and the threat of the girls being expelled for being in last place, the girls must work even harder. One way to ensure their stay is to master Overboost. The girls have a long and hard training regimen ahead of them. But for one of the girls, Yuni, she cannot take the training anymore and tends to run away.

In the middle of the night, Yuni decides to high tail it out but as she is about to leave Shuri shows up and accompanies Yuni. Shuri has no interest in running away but instead go on a camping trip searching for landmarks for a warrior’s path map that she acquired from the dojo that she trained at.

Once they set up for camp Shuri and Yuni fell asleep, but the sound of crying woke Yuni up in the middle of the night. The crying was from Shuri’s sword, Muramasa, and the image of a girl with purple hair appeared. Through talking with Muramasa, Yuni discovered that she never accepted the pact with Shuri and will not grant her the full power of the sword. Now we know why Shuri can never unsheathe her sword.

Yuni, in the morning, sets off again, albeit alone this time, but finds herself facing a bear hiding in the bushes. She tries to run away, which you should never do, but the bear catches up to her. Yuni partner Amarita, Ama-chan, jumps to a nearby tree and Yuni attempts the jump too but misses and falls to the ground. Ama-chan jumps on top of Yuni, protecting her. In their fight or flight response, they Overboosted and merged together scaring of the bear. Shuri appears moments later seeing Yuni and Ama-chan merged together in an Overboost.

Meanwhile the other girls at the dorm are all prepared to go out searching for Yuni and Shuri. But as they were about to head out, Yuni and Shuri appear from the trees making their way back to the dorm safe and sound.

Though the episode did not have much furthering of the plot, the character development of Yuni and Shuri was a nice departure. Yuni always struggled with the hardcore training routine they had on a daily basis, but now Yuni can see an improvement in herself now that she can Overboost. We also see the bond that Yuni and Shuri now have from that experience, though Yuni has a much more understanding about Shuri than Shuri has for Yuni but they both have grown closer in their own way.

This episode focused more on the relationship of Misa and Namiki, but also introducing a new challenging racing team, Hell’s Kitchen. Hell’s Kitchen is comprised of pop-idol girls who also jet race.

We see the struggle that Misa is having trying to grow closer to Namiki but struggles with just asking for Namiki’s number. Misa has mostly been alone and didn’t really have much freinds until Namiki came along, allowing Misa to open up more. Namiki, on the other hand, tries to invite and spend more time with Misa but feels as though she might be pushing Misa to do things that maybe she doesn’t want to do. The ironic part is that Misa does want to s[end time with Namiki and do things with her but is too nervous to tell Namiki. An interesting, and common, dilemma.

Finally, the girls are able to practice on the Kandagawa River, to only find out that their application has been cancelled at the last minute. The reason? The pop idol group, Hell’s Kitchen, forced the officials of the jet racing sport to allow them time on the River, thus cancelling Misa and Namiki’s scheduled time. Well, we kinda know how this is going to turn out. A race to see who gets practice time.

It is kind of ashamed that the series used the same plot from the beginning of the series to act as a plot device to have Misa and Namiki be challenged to a race. The challenge could of been justified by a different reason and not a recycled conflict.