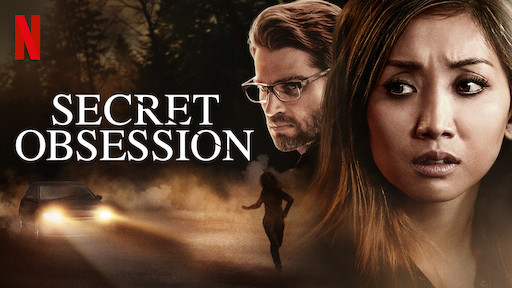 Brenda Song plays Jennifer Williams, a woman who is being chased by a mysterious man only to be saved by being hit by an oncoming vehicle. Due to the accident and previous trauma, her memory is lost.

Mike Vogel plays her husband, Russell Williams or is perhaps someone entirely different.

Dennis Haysbert, great man and great actor, plays Detective Frank Page, the man investigating Jennifer’s accident. He doesn’t just play a detective, but you get a deeper connection early on with him as a father who lost his only daughter. Suspicion builds up as a disgruntled, large, menacing looking man appears, painting him as the obvious villain.

Suspicion continuously builds as the husband hides info from Jennifer or lies about certain things to her. All is not what it seems, or Russell is not who he seems to be.

The all too common alone in the mountains in a cabin-style home trope is overdone and somewhat expected in Thrillers, but I digress. In this genre though, it does fit in the setting.

In the beginning of the film, her memories of Russel were faded, but throughout the film her faded memories began to place Russell’s face in place for what she thinks is the truth. She dives deeper and deeper into her past to help remember, but it only starts to cast doubt on what is true.

As for the Detective, he starts to find out lies of his own as the info he is being given about Russell and Jennifer are fake. The movie continually grows in tension and suspicion, keeping the viewer cloudy in mystery and curiosity, discovering the obsessive and demanding side of her husband.

Once the truth starts to reveal itself, it’s a race to find out as much as she can before her “husband” finds out and puts a stop to her. The plot is basic, to me at least, with a man overly obsessed with a woman and will do whatever it takes to get her, but I feel like the mystery aspect puts a not new but well done twist. An indirect third party mystery solving character was a nice add to this film.

For a Netflix film that kinda edges on the independent film side with dark undertones, the acting in well done and believable. Having well rounded, well known actors, maybe not A-List actors, really helped this film in the end.

I won’t spoiler anymore of the film, I promise. So, if you have a Netflix subscription and enjoy a good Thriller or Psychological Thriller, then I highly recommend you give this one a look. It’s an hour and an half film that will keep you on edge.